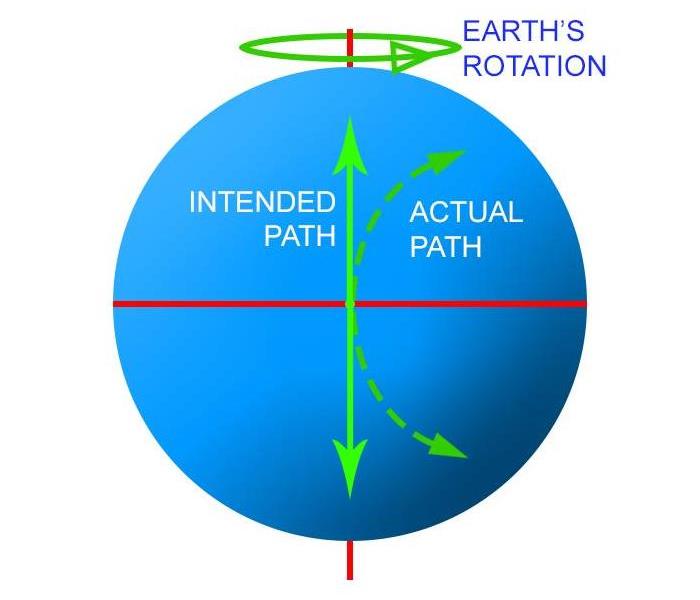 Illustration of how the Coriolis Force acts with the curvature and rotation of the Earth.

Hurricanes are a force of nature to be reckoned with. They are warm, wet cyclones- some with winds strong enough to snap branches off of trees and send debris flying. But there are some interesting facts about hurricanes even seasoned Floridians might not know. How many of these do you know?

Two hurricanes won't crash into each other to become a single storm, but will circle each other.

The Fujiwhara Effect, named after meteorologist Sakuhei Fujiwhara, describes a phenomenon where two cyclones will circle around each other as they continue on their path. If given enough time, the two storms will circle one another, gradually closing the gap, until they swirl into a single storm.

The rotation of the Earth causes the spinning of ocean waters, winds, and yes, hurricanes. This force is known as the Coriolis Force or Coriolis Effect and has a huge influence over air and sea travel as well as storm formations.

Cyclones, typhoons, and hurricanes are different names for the same weather phenomenon.

The globally used meteorological term for the phenomenon is "tropical cyclone." In the Atlantic and Eastern Pacific Oceans, we call them hurricanes. In the Western Pacific, they are called typhoons. And in the Indian Ocean and Southern Pacific they are referred to as cyclones.

Hurricanes can’t form on the Equator because they need the Coriolis Effect to spin.

Nearly double the amount of hurricanes happen in the northern hemisphere than in the southern.

Oceans in the southern hemisphere tend to have stronger winds than their northern counterparts. Because of these winds, it's less likely to create the conditions needed for hurricanes to form. Hurricanes require warm waters, storm conditions (meaning rain clouds), and gentle wind to steer and shape the tropical cyclone. With harsh winds, storms get broken up and are less likely to form south of the equator.

We hope you learned some interesting hurricane facts from this blog! Check back often this hurricane season for more facts, hurricane prep tips, and other readiness info.